Wonderful route in a majestic environment that alternates between different dolomitic scenarios: lunar in the plateau, grandiose in the Upper Valley of Pradidali, embedded, almost hidden in Val di Roda. The descent, a treat for true connoisseurs, should be caught at the right time. To find good snow throughout the descent you need intuition, knowledge of the environment and snow. Surely the most rewarding route of the group, also for the relative difference in height uphill and the long downhill skiing that takes you back to San Martino di Castrozza.

Go down the steep slope that leads to the fork below and from there, crossing to the right under the vertical walls of the Pala di San Martino, Immink peak and Pradidali peak, we arrive at the Pradidali lake area without going too far down into the valley so as not to lose too much altitude.

On the other side of the fork there is a small corner of paradise, snow often of excellent quality in a super sunken valley facing north, which leads with a never excessive slope around the Torre Felicità, the first and lowest of the vertical towers of the Val di Roda that overlook us on the left side. To the right is the Immink peak and the imposing west side of the Pala di San Martino. Going around the tower, it is sometimes necessary to use the rope to overcome a short jump of rock, but in normal snow conditions it disappears. The channel that follows is often rather narrow and you need to have a good technique to be able to ski while having fun. Exit to the left as soon as the slopes allow it in order to access the parallel channel, since the main channel is blocked by a rock jump. Go over a short steep strip, sometimes with little snow, and then ski down the funny slopes below in the woods until you reach the bed of the stream that gives its name to the valley.

Cross it and overcome the typical erratic boulders that give access to the forest road. From here, to return to the car park of the Colverde gondola lift, it is necessary to follow the forest road in a northerly direction, first slightly uphill, then downhill. 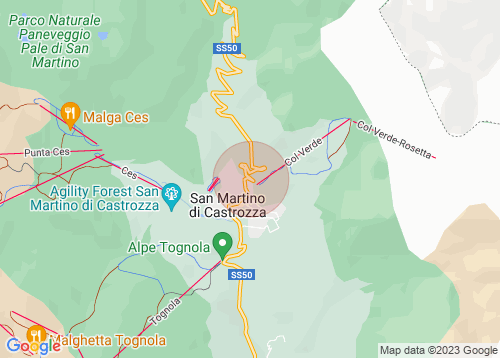