Departure from Castel del Monte, along a suggestive and panoramic loop route through woods and blades immersed in the Alta Murgia National Park.
Along the way, farmhouses, jazzi, post offices, casedde and ancient cisterns cross.
You go along sheep tracks, paths and mule tracks.
Cross the Pugliese Aqueduct bridge that retraces an ancient sheep track.
And then you immerse yourself in the Lama Genzana among holm oaks and downy oaks in the beauty and silence of nature.
(The Lama is a shallow erosive furrows, typical of the Apulian landscape, which convey the rainwater from the Murgia plateau towards the closing point of the hydrographic basin to which they belong.)
Leaving behind us the stone crown that dominates from the hill
And here it is again! eventually reappears .. Fascinating and mysterious.
Isolated on a hill in the Murge, from where you can admire a vast panorama.
The only document in which the castle is mentioned is a letter sent from Gubbio, in January 1240, by the Swabian emperor Frederick II to the executioner of Capitanata, Riccardo di Montefuscolo, tells us about roofing works to be carried out in relation to the «castro quod apud Sanctam Mariam de Monte ».
Subsequently, the building assumed the roles of prison and ducal residence. Passed through various dominations and properties of different lords, for a long time, after repeated looting and plundering, it was a refuge for shepherds and robbers (especially in the 18th century).
Purchased as a ruin by the Italian state in 1876 for 25,000 lire, it has since undergone continuous restoration; the most recent have recovered its ancient splendor. 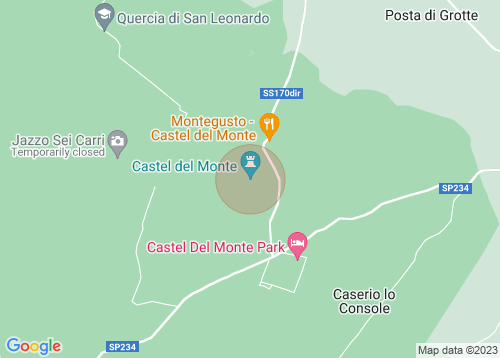