E-bike tour. A fascinating journey through time to discover the ancient coastal fortifications of the Spanish Kingdom of Naples. We will retrace the millenary stages of the militia, from the coastal tower in the heart of the Marine Protected Area "Torre del Cerrano", to the castrum silvae on the high ground, through breathtaking views, cults and traditions hidden behind unforgettable evidence of a timeless past.
Starting from Silvi and crossing a part of the historical pinewood which is rich in local flora and fauna, you arrive in a blaze of scents and colours to the Torre del Cerrano Protected Marine Area, where the Tower of Cerrano (Torre di Cerrano) is located.
Once arrived at the fortress of the Tower of Cerrano, one of the Cerrano's Guides will be waiting for us and will accompany us in a careful visit of the whole facility recently enriched by the Museum of the Sea. From the terraces of the Tower, a place where pirate ships were sighted in ancient times, you can enjoy a wonderful view of the entire Adriatic coast.
At the end of the visit we leave the Tower of Cerrano behind us and through a wonderful hilly path made of ups and downs, we reach the town of Silvi Marina. From here we will ascend to Silvi Paese, the Pearl of the Adriatic Sea, characterized by several churches and amazing views.
Silvi Paese - ancient fishing village - is the historical centre of the municipality of Silvi. The village is situated on a hill 243 metres above sea level and dominates all the valleys of the Cerrano river and the Fosso Concio. It also offers a viewpoint overlooking the Adriatic Sea from Ancona to the Tremiti Islands, and the Gran Sasso.
The origins of the village date back to the Middle Ages, more precisely it was founded by a group of fishermen who moved from the coastal village Macrinum or Silva, on the promontory hill that descends into the sea.
Among the most important monuments along the road from Silvi Marina to Silvi Paese are the Church of San Salvatore, built around 1100 in honour of the first protector of Silvi, the Church of San Rocco, built in the 16th century as a rural chapel and the Chapel of Madonna dello Splendore.
In addition to these religious buildings, there is also a modern 20th-century fountain, the medieval Locanda del Frate and the picturesque arches that surround the village.
A tradition, born in the 16th century, linked to the terrible events of the Turkish marauders, is that of Ciancialone. It is celebrated on the last Sunday of May in Silvi Paese and engages the whole village in the preparation of a large cylinder made of reeds tied together, which is up to ten meters high. Raised vertically in the main square and lit, it attracts around it a festive crowd that dances and celebrates until the Ciancialone is extinguished.
Leaving the village of Silvi we will follow a wonderful panoramic route, immersed in the countryside and the Silvarole Hills, and then return to Silvi Marina.

The cycle tour will be led by qualified guides and guides from Cerrano. 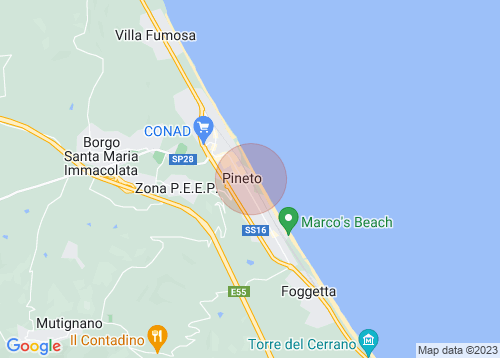